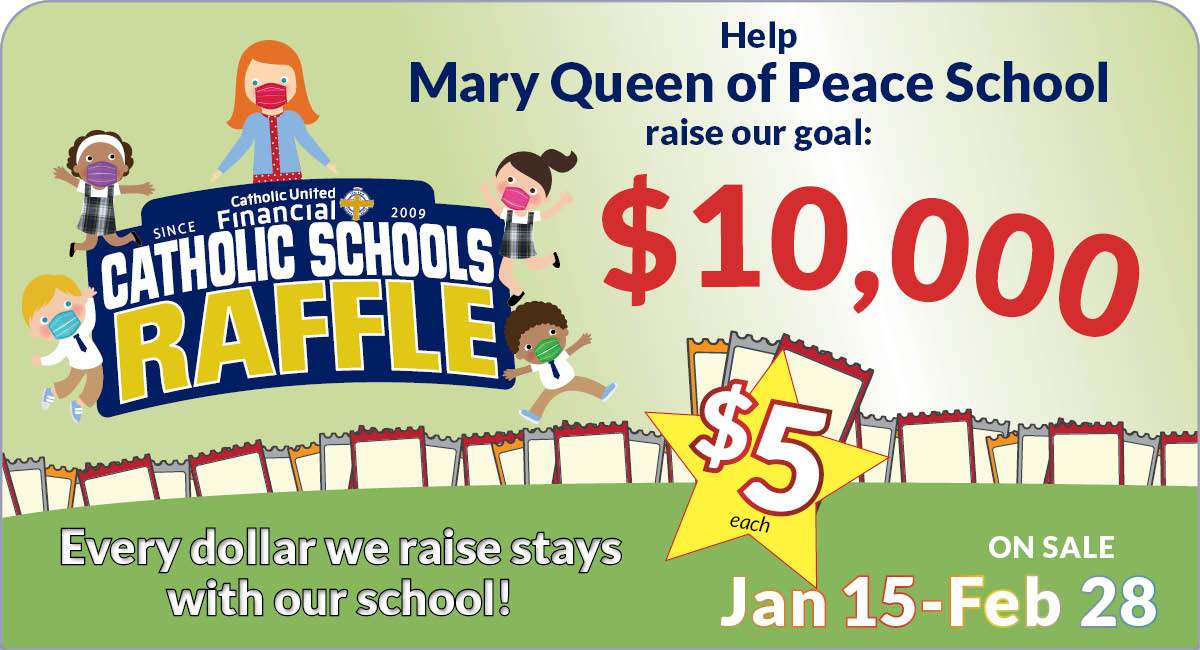 The Catholic Schools Raffle returns this winter to Mary Queen of Peace in Rogers, giving you the opportunity to turn $5 into a brand new car or $20,000 in cash while supporting your local Catholic school.

Starting January 15, students from Mary Queen of Peace will join students from 82 other schools across Minnesota, North Dakota, and South Dakota in selling the $5 tickets. Each ticket purchased gives ticket buyers the opportunity to win a 2021 Ford EcoSport (or $20,000 in cash), or other great prizes totaling $40,000 in value. Best of all, every penny of every ticket sold stays at Mary Queen of Peace thanks to the Raffle’s sole sponsor Catholic United Financial. The St. Paul-based company provides all the prizes and promotion materials for the Raffle at no cost to the participating schools.

“Catholic United’s mission since our founding 143 years ago has included supporting Catholic education, and we couldn’t be happier or prouder to support our schools with the Catholic Schools Raffle,” explained Catholic United President Mike Ahles. “Since the program started, we have invested over one million dollars in the Raffle because we understand how this unique fundraiser greatly benefits the students and their teachers.”

Now in its twelfth year, the Catholic Schools Raffle has raised over $9.5 million for Catholic schools in Minnesota, North Dakota, and South Dakota. This year, Catholic United is challenging the 82 participating schools to collectively raise $1 million during the six week selling period. To help reach this goal, Mary Queen of Peace hopes to sell enough tickets to raise $10000. The money raised allows schools like Mary Queen of Peace to provide tuition assistance, update technology systems, or to cover the cost of special learning opportunities like guest speakers and field trips.

Ticket sales begin January 15 and run thru February 28. Tickets are only available at participating schools. The Grand Prize drawing ceremony takes place at 11:00 a.m. (CST) on Thursday, March 11 at the Catholic United Financial Home Office in St. Paul, MN. Raffle updates and a full list of participating schools can be found on Facebook at www.facebook.com/CatholicSchoolsRaffle.

Catholic United Financial is one of the largest fraternal life insurance associations in the Upper Midwest, serving more than 80,000 members in Minnesota, North Dakota, South Dakota, Wisconsin and Iowa. As a not-for-profit company, Catholic United transforms profits from the sale of life insurance, annuities and retirement products into programs that support and amplify the Catholic community’s ability to thrive and grow. Visit our website to learn more: www.catholicunitedfinancial.org.